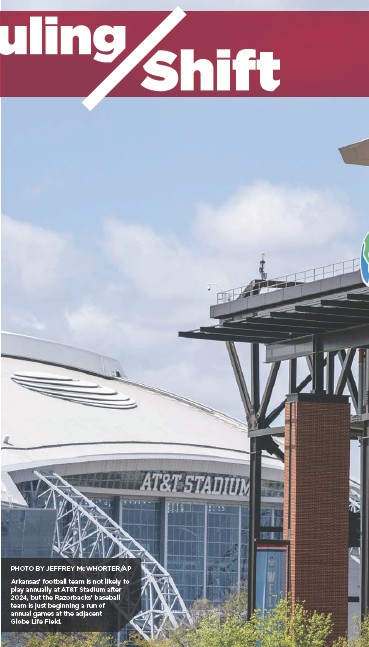 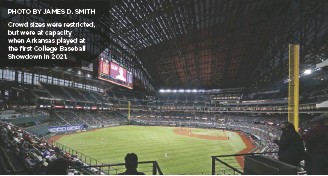 Diamond Hogs will keep Arlington an annual destination Much will be said this week about the Arkansas Razorbacks’ future presence in Arlington, Texas. It is Arkansas-Texas A&M football week, after all. The Razorbacks and the Aggies are scheduled to play at AT&T Stadium through the 2024 season, at which time they are expected to move the series back to Fayetteville and College Station. It will be bittersweet to watch the neutral-site game fall by the wayside. The Texas-Oklahoma and Florida-Georgia series have shown that neutral-site series can work if both sides are fully committed. A neutral-site conference series was never the intent for the Southwest Classic. It began as a non-conference matchup in 2009 meant to restart a dormant rivalry in a coveted recruiting area for both schools, athletically and academically. The series moved to campus in 2012 and 2013 after the Aggies joined the SEC, then back to Arlington as part of a restructured 11-year agreement in 2014. Each team has had its share of memories there. The Aggies couldn’t win a non-conference game and the Razorbacks didn’t win a conference matchup until last year to snap a nine-game losing streak in the series. Unlike the Oklahoma-Texas Red River Rivalry at the Cotton Bowl in nearby Dallas, or the Florida-Georgia Cocktail Party in Jacksonville, Fla., the Southwest Classic has lacked the type of meaningful games that make these neutral-site series grow. Yes, CBS has featured the game in its afternoon time slot twice, including last season, but the game has largely been just another on the schedule. It’s unfortunate because the scene inside and outside AT&T Stadium is so unique — like a bowl game in late September. College Station is closer and Texas A&M has been better, but Arkansas fans have made it feel like a true neutral setting, even during rotten years. It remains to be seen if Arkansas will have a football presence in Arlington moving forward. The connections to the Jones family and the Dallas Cowboys are deep, so it would be naive to rule out future games there, though likely never on an annual basis again. While Arkansas football nears the end of its run in Arlington, the Razorbacks’ baseball program appears to just be getting started. Arkansas was a hit when it played in the inaugural College Baseball Showdown at Globe Life Field in 2021, and the Razorbacks have committed to play there for at least the next four seasons, according to Jared Schrom, vice president of REV Entertainment, the organizer of events at Globe Life Field. In February 2023, Arkansas is scheduled to play Oklahoma State, Texas and TCU there to open the season. The Razorbacks are also scheduled to play Oklahoma State, Michigan and Oregon State there in 2024, Arkansas coach Dave Van Horn said previously. “The goal for us from Day 1 was to have the best programs play at Globe Life Field,” Schrom said. “Arkansas is just that. We love having them down here because of the level of baseball that they play. “But beyond that, I mean DFW just has such a strong following for Arkansas, the alumni base, the fans. It’s easy for them to get here. So between the alumni locally and the folks traveling from Fayetteville, it’s kind of a no-brainer.” The Rangers observed strong Arkansas ties to the area in the years before the College Baseball Showdown — tailgate parties in the Rangers’ parking lots adjacent to AT&T Stadium before football games, and a Razorbacks-themed night at the ballpark as part of the Rangers’ University Days promotion. The Razorbacks defeated Texas Tech, Texas and TCU at Globe Life Field to open the 2021 season. Covid-19 protocols forced limited attendance inside the ballpark, and Arkansas’ games were filled to the available capacity of around 15,000. Globe Life Field seats 40,300. For the right game — say Arkansas vs. Texas on a Saturday night — it would not surprise to see Arlington have an attendance larger than anything at the College World Series. “We certainly hope we get to that level,” Schrom said. A few weeks following the baseball team’s trip to Arlington in 2021, Schrom and REV Entertainment president Shawn Decker traveled to Fayetteville to meet with Van Horn about his experience. They asked him if the Razorbacks might agree to play there every year moving forward. Van Horn told them it wasn’t possible for 2022 because a scheduling commitment had already been made, but that it might happen for 2023 and beyond. “We loved it last year and obviously won three games down there,” Van Horn said during a speech to the Hawgs Illustrated Sports Club earlier this year. “It’s nice and cozy inside there. Our fans showed up.” Schrom said the Razorbacks have committed to playing at Globe Life Field in 2025 and 2026, and conversations have been had about 2027. Games might not necessarily be part of the six-team, season- opening College Baseball Showdown. The Rangers are exploring the potential for hosting additional early-season college baseball events. “Listen, anytime Arkansas wants to come down here, we’d certainly love to have them, and so we’ve worked to develop that relationship and find opportunities for those guys to come down here,” Schrom said. “We love college baseball and we love the game of college baseball, so we’ve kind of designated February…to try and get some great matchups. “It gives us additional opportunities to get other schools that want to come down here that don’t necessarily want to participate on Opening Weekend. It opened up opportunities with Arkansas coming Weekend 2 or Weekend 3 down the road. We want to get them down here whenever they want to come.” Arlington trips aren’t coming to an end, just moving to a different time of year.