Hogs survive scare from Petrino The meeting of Arkansas football past and present nearly made for a murky outlook for third-year coach Sam Pittman and the Razorbacks. 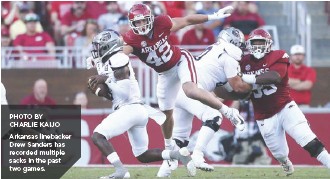 In charge of a Missouri State program ranked fifth in the Football Championship Subdivision, Bobby Petrino one more time gave Arkansas fans a reason to be frustrated with him. The Razorbacks and Bears turned in a game far more interesting on the field than many anticipated when the matchup was announced six years earlier. But Arkansas avoided a big upset thanks to the shift that occurred after Pittman was ushered in as coach in December 2019 as Chad Morris took the left lane home on flat tires. No. 10 Arkansas used a 21-point fourth quarter and electric performances in all three phases to move to 3-0 with a 38-27 victory over Missouri State. Pittman remarked in his postgame press conference, complete with literal and figurative sighs of relief, that the Razorbacks simply continued battling and throwing punches. Faced with similar dilemmas on numerous Saturdays prior to his arrival, Arkansas’ personnel often folded. Not in 2022, and not with Pittman on the sideline. “We’re just so fortunate to win,” said Pittman, who improved to 15-11 as the Razorbacks’ coach. “These games like this, if you’re not playing well or the other team’s playing well or whatever the situation is, you’re trying to fight and claw to get out with a win. There was several different times in the game it looked like we weren’t going to. Our kids just kept fighting and clawing. “To come out with an 11-point win says a lot about the culture of our program and our kids. I’m really proud that we won the game.” Not only did Missouri State race out to a 17-0 lead early in the second quarter on quarterback Jason Shelley’s 24-yard run in which he broke free from linebacker Bumper Pool in the open field, the Razorbacks essentially gave the Bears a pair of helping hands in doing so. Arkansas twice lost fumbles, and there was also a turnover on downs after a run play on fourth-and-9 came up well short. Then, as the game wore on, the visitors applied pressure unique to Pittman’s first two-plus seasons. Missouri State with 12:04 remaining took a 27-17 lead on a 31-yard field goal by Jose Pizano. But Arkansas controlled the game from there, overwhelming the Bears in the night’s most critical moments. Just 26 seconds passed between the field goal and the first of the Razorbacks’ three fourth-quarter touchdowns. Raheim “Rocket” Sanders, making the case weekly that he is among the SEC’s most talented all-around tailbacks, took a shovel pass from quarterback KJ Jefferson to the house from 73 yards out and cut the team’s deficit to 27-24. Sanders finished the night with two receptions for 75 yards and the second receiving score of his Arkansas career. The Razorbacks’ defense and special teams soon engaged. Off-season additions from the NCAA transfer portal Jordan Domineck, Landon Jackson and Drew Sanders combined for a pair of sacks on Missouri State’s next two snaps and forced the Bears to punt. Punt returner Bryce Stephens then flipped the game. The Oklahoma City native’s 82-yard punt return for a touchdown provided Arkansas a splash play that shook the press box and created a pop from the home crowd that rivaled any from the post-Petrino era. Arkansas for the first time led 31-27 after the