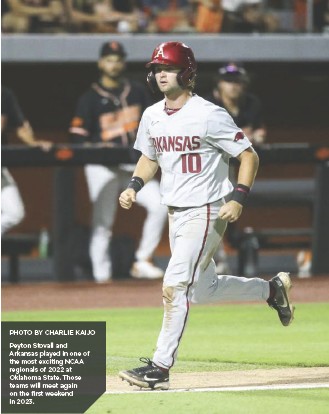 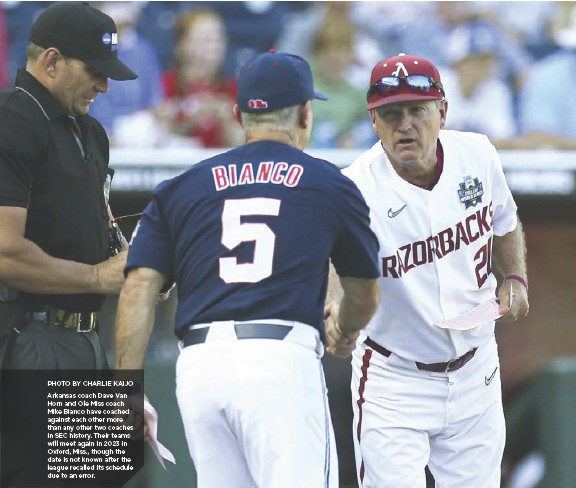 There is a balancing act to college baseball scheduling. On one hand, the non-conference schedule needs to be good enough to impress the NCAA Tournament selection committee and prepare a team for conference play, and ultimately the postseason. But there need to be winnable games, too. Having enough home games to appease season-ticket holders is also a consideration. Arkansas’ 56-game baseball schedule for 2023 appears to check the necessary boxes. After revisions (more on that below) it is expected to include 34 games against 15 teams that played in the NCAA Tournament last season. Thirty-six games are scheduled in Fayetteville. Four of Arkansas’ opponents — Texas, Ole Miss, Auburn and Texas A&M — were with the Razorbacks at the 2022 College World Series, and Ole Miss is the reigning national champion. In non-conference action the Razorbacks are scheduled to play seven teams that won conference championships last season — Louisiana Tech (Conference USA, tournament), UNLV (Mountain West, regular season), Wright State (Horizon League, regular and tournament), Missouri State (Missouri Valley, tournament), Southeast Missouri State (Ohio Valley, tournament), Army (Patriot League, regular and tournament) and Lipscomb (ASUN, regular). They are also expected to play reigning SEC champion Tennessee. Couple all of that with the rest of the always-difficult SEC schedule, plus other non-conference games against Oklahoma State and TCU — postseason teams last season — and the Razorbacks seem to have assembled a schedule similar to 2021 when their schedule strength was best nationally. Like 2021, Arkansas will open 2023 with a trip to the College Baseball Showdown where the Razorbacks will play Oklahoma State, Texas and TCU. There is always buzz for a game against the Longhorns, but just as anticipated this year might be a rematch against Oklahoma State. Any team in orange seems to move the needle when it comes to baseball. The Razorbacks eliminated the Cowboys at a thrilling NCAA regional in Stillwater, Okla., in June. On a Baseball America podcast this summer, Arkansas coach Dave Van Horn said Oklahoma State might have otherwise played in the College World Series. “They were definitely one of the top two or three teams we played all year,” Van Horn said. “It was too bad, but sometimes you run into that. If they had been in another regional or we had been in another regional, we might have faced each other in Omaha.” Here are some other things that stand out about the Razorbacks’ schedule: OOPS! The SEC released its 2023 baseball schedule on Sept. 14. It recalled the schedule two days later. The reason? Two matchups on the schedule were not meant to occur until 2024, according to the league’s scheduling rotation. A new schedule is expected in the near future. A glaring omission from the original schedule released by the league was an Arkansas-Tennessee matchup, which had not occurred since an epic series of one-run games in 2021. The teams also played in the SEC Tournament Championship Game that year. According to league scheduling guidelines, teams are not meant to go two seasons without a series. Games between the Razorbacks and the Volunteers are expected to be added to Arkansas’ home schedule in 2023. It might generate as much buzz as any college baseball matchup. Arkansas in 2021 and Tennessee in 2022 were the No. 1 overall seeds in the NCAA Tournament before similar home exits in the super regional. A second year without a conference series between the programs would have been a disservice to the sport. The Razorbacks were not expected to host Missouri until 2024. That series is expected to go away in favor of the one with the Vols. For now, Arkansas’ non-conference schedule is not expected to be impacted by the SEC scheduling change. IN-STATE TEAMS Arkansas likely would not have been sent to Stillwater if not for the fact the Razorbacks played so many games (8) against in-state teams in 2022. There were six teams that hosted NCAA regionals with fewer victories than Arkansas, but all had a better RPI score, which takes into account the record of a team, the record of its opponents, and the record of its opponents’ opponents. Where the games are played — home, away or a neutral field — is also factored, with home wins accounting for the smallest bump in RPI. The Razorbacks played Arkansas State, Arkansas-Little Rock and Arkansas-Pine Bluff twice each at Baum-Walker Stadium, and played Central Arkansas once in Fayetteville and once in North Little Rock last season. Arkansas went 8-0 in those games, but all four teams had losing records — UALR (24-27), UCA (24-29), UAPB (11-36-1) and Arkansas State (11-38). Arkansas has reduced the number of games to four against in-state teams next season. The Razorbacks will play UALR twice and will play one game each against Arkansas State and UCA. UAPB will not be on Arkansas’ schedule for the first time since 2019, when a scheduling ban against in-state teams was lifted. UAPB’s RPI last season ranked 299th out of 301 teams. LONG HOMESTAND If the non-conference schedule does not change, the Razorbacks will play at least 15 consecutive home games at Baum-Walker Stadium beginning with a Feb. 21 game against Grambling State. The homestand could last as many as 19 games, depending on whether the SEC keeps Arkansas at home on the first weekend of conference play. The Razorbacks were originally scheduled to open SEC play with a home series against South Carolina, but that is subject to change.