Sports getting up to $40 million in renovations 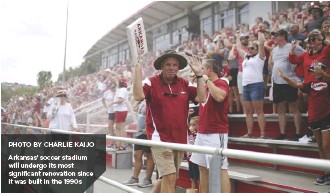 Officials are in the early stages of planning renovations to the Razorbacks’ soccer and softball facilities that will cost between $30 million and $40 million combined, according to figures submitted to university trustees. The plans call for the construction of a new operations buildings for soccer and the expansion of an existing softball building that will make them similar to the Razorbacks’ Hunt Baseball Development Center and O’Mara High Performance Track Center that opened in 2021. The new 27,000-square-foot soccer building would be built on the site of an existing fieldhouse on the north side of Razorback Field. About 21,000 square feet would be added to an existing softball structure on the west side of Bogle Park. A timeline for the building projects is preliminary, but Arkansas athletics director Hunter Yurachek said the earliest either would begin would be the end of those teams’ seasons during the 2023-24 school year. Soccer is a fall sport and softball competes during the spring. As part of the soccer project, the east side of the field would be overhauled. New premium-seating options would be constructed atop team dugouts, a concept similar to some European soccer stadiums, Yurachek said. The goal, Yurachek said, is to increase soccer capacity to around 2,500. The listed capacity at Razorback Field is 1,500 and the team averaged 1,537 fans per home game last season. Other planned soccer renovations include a new grass field and a new video scoreboard. A pedestrian route from the parking lot adjacent to the stadium will also be improved. Arkansas’ soccer and softball programs have become nationally competitive in recent years under the leadership of soccer coach Colby Hale and softball coach Courtney Deifel. The softball team has hosted NCAA super regionals the past two seasons and the soccer team played in its first Elite Eight last season. Arkansas has won or shared the past three SEC soccer championships and past two SEC softball championships. Additional softball renovations will include upgrades to restrooms, ticketing and concession areas, and the entrance to Bogle Park will be redesigned. SOFTBALL EXHIBITIONS ANNOUNCED Arkansas’ softball team will play five games against three teams during its fall practice season. The Razorbacks are scheduled to play Louisiana Tech three times on the weekend of Oct. 8-9, including a doubleheader on Oct. 8. Arkansas will play Missouri Southern State the following day. A fourth exhibition game is scheduled for Oct. 12 against Seminole (Okla.) State College. Missouri Southern State competes in NCAA Division II and Seminole State competes in NJCAA. Louisiana Tech was 39-20 last season and won the regular-season championship for Conference USA. The Lady Techsters were left out of the NCAA postseason after they were upset in their conference tournament. Arkansas went 48-11 last season and lost to national runner-up Texas in a super regional. In addition to the games against outside competition, the Razorbacks are scheduled to hold five open intrasquad scrimmages. All of the scrimmages are free of charge. LOVE ELECTED TO HALL OF FAME Arkansas women’s basketball assistant coach Pauline Love will be inducted into the Jones (Miss.) College Hall of Fame on Sept. 22. Love played basketball for the Bobcats during the 2006-07 season and earned All- America honors by averaging 15.9 points and 13.7 rebounds. She made 52% of her shot attempts. Love transferred from Jones to Southern Miss, where she played three seasons and averaged 16 points and 11 rebounds. She was a three-time finalist for the Gillom Trophy that is given to the best female college basketball player in Mississippi. Arkansas head coach Mike Neighbors hired Love to his first staff in 2017-18. She grew up in Luxora in Northeast Arkansas.