In the early stages of his third season as Arkansas’ offensive coordinator, Kendal Briles has placed his personnel in an inordinate amount of unique sets and formations. 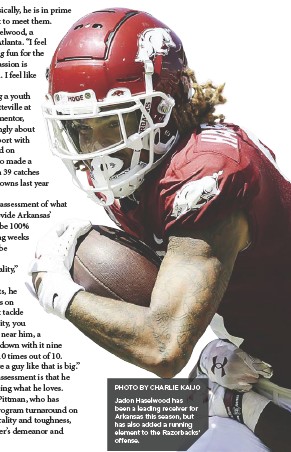 That variety has allowed the Razorbacks to get the ball in the hands of essentially all of their playmakers. They have quite a few. In victories over Cincinnati and South Carolina, Arkansas had 7 players (2 quarterbacks, 3 running backs and 2 wide receivers) carry the football, and 8 players (4 receivers, 2 running backs, 1 quarterback and 1 tight end) on the receiving end of a pass from KJ Jefferson. Perhaps most unexpected — based on what was seen in practice viewings in the preseason and the last two years at Oklahoma — was Jadon Haselwood’s touches out of the backfield. It was an intriguing wrinkle that likely made many in Reynolds Razorback Stadium curious if he would actually get a shot to make an impression. Haselwood did, and the grit shown during one particular sequence should give way to more reps moving forward. Haselwood, stationed to Jefferson’s right in the shotgun, crossed in front of his quarterback and took a forward pitch. With his eyes upfield, he made one Gamecocks defender miss, stiff armed another then threw a 6-1, 183-pound defensive back to the ground with a strong right arm. The angry run went for six yards and drew an animated reaction from a crowd of more than 72,000 fans. It was the latest indication that Haselwood is coming into his own as a Razorback. “Haselwood has got a little bit of edge to him,” said Dan Orlovsky, the ESPN color analyst calling the game. “That’s the second time we’ve seen that (toughness) from him today.” With the Razorbacks now staring down the toughest stretch of their schedule — vs. Texas A&M in Arlington, Texas against Alabama in Fayetteville and road games at Mississippi State, BYU and Auburn — Haselwood’s timing could not be better. Loads of expectation were placed on the talented wide out when he signed on at Arkansas. Mentally and physically, he is in prime position to do his best to meet them. “It’s fun,” said Haselwood, a redshirt junior from Atlanta. “I feel like I’m actually having fun for the game again and my passion is starting to show again. I feel like I’m back.” In late June during a youth football camp in Fayetteville at which he served as a mentor, Jefferson spoke glowingly about his workouts and rapport with Haselwood. He arrived on campus as a talent who made a team- and career-high 39 catches and scored six touchdowns last year at Oklahoma. The quarterback’s assessment of what Haselwood would provide Arkansas’ offense has proven to be 100% accurate in the opening weeks of their first, and maybe only, season together. “He brings physicality,” Jefferson said. “Just watching his highlights, he loves contact. He takes on contact. One guy can’t tackle him. His catching ability, you put the ball anywhere near him, a 50-50 ball, he’ll come down with it nine times out of 10 — or 10 times out of 10. “Being able to have a guy like that is big.” Haselwood’s self-assessment is that he is again having fun doing what he loves. Arkansas coach Sam Pittman, who has quickly keyed a full program turnaround on a foundation of physicality and toughness, approves of the receiver’s demeanor and tenacity. He has witnessed firsthand the sparks of joy and fire emanating from Haselwood, who he says is a grown man. “Yeah, I think he’s having a good time,” Pittman said. “He’s a physical kid. He’s a mature kid. He’s not afraid to say his opinion, which helps the football team. He’s not afraid to lead. “He brings a lot of confidence to the offensive football team. He just does. He brings a lot of confidence.” Something else Pittman appreciates about Haselwood is that he is routinely in good spirits. “He’s never down,” he said. “I like everything about him. I think he’s tough and physical, a good player. I hope he’s having fun, because I’m having fun because he’s on the team.” Haselwood is an ever-present personality. Years ago when he played for former Heisman Trophy winner Cam Newton’s 7-on-7 team in Georgia, Haselwood learned to jot down notes and important information by hand. He joked that the tactic helps combats his short attention span. On the football field, he has a unique understanding of the potential that lies in every moment and play. “I’ve got to make do with any opportunity,” Haselwood said. “Ain’t no telling when it’s going to come back. You’ve got to make it count. And it’s really just (Jefferson) being comfortable and giving me the opportunity, to be honest. “Nobody’s perfect, but you always want to strive for that. You always want to make goals you know you may not reach.” Speaking with Haselwood, one can get the sense that he believes he is tad misunderstood as a person and football player. It is why he has tattoos of The Joker and the late rapper Tupac Shakur on the arm with which he discards opposing defensive backs. The ink is an expression of who he is, what he is about and what motivates him — a glimpse into his heart and mind. “In my life, people kind of look at me as a villain, but everything is because of circumstance,” Haselwood explained. “People may think The Joker was a villain, but really there’s a reason why he acts how he acts, and it’s pretty clever how he deals with certain situations. Even the same with Tupac. “Some people may look at him like a crazy person, but deep down he’s got a genuine will and heart and is cut from a different cloth.” Confidence exudes from Haselwood. Teammates at Arkansas, particularly cornerback Hudson Clark, quickly picked up on that in spring practices, and nothing has changed. Each time he steps on a field, he believes he has nothing to prove to those on the outside. But Haselwood wants time and time again to prove to himself that he is the man. Golden opportunities to do so are aplenty the remainder of the season.